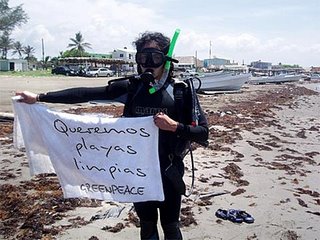 Wow, what a report that just came out about the beaches of this area. The worst in Mexico. If the bacteria count gets to 104 they close the beaches in the USA. The bacteria count was as high as 22,000 at our beaches. I don't know how it can be this bad and there not be a lot of people getting sick, but the testing was done by an official government lab. Maybe we locals that are in the water all the time are immune to this level of bacteria but it could make an unsuspecting tourist very sick. Green Peace Mexico has started a campaign called "Queremos Playas Limpias" or We Want Clean Beaches. I know that of all the places that I have been in Mexico, Guaymas is the most polluted, and I have read that the levels of skin and respiratory infections are extremely high among the children of Guaymas. It will be interesting to see what the reaction will be from the local business leaders. Will they demand action to clean up the pollution, or will they try to cover up the facts and downplay the risks. Would you swim in water or let your kids swim in water that you know is more than 200 times the established at risk level for bacteria? You wouldn't if you were in the states because the risks would be well publicized, but I'll bet that most people here will ignore this report. Swim at your own risk !
Posted by kiting_in_paradise at 8:16 PM