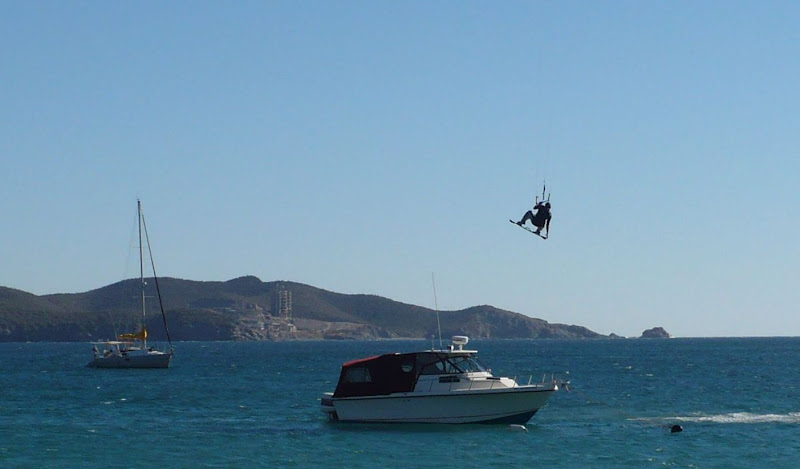 Posted by kiting_in_paradise at 5:36 PM No comments:

The wind blew great, a bunch of kiters showed up, and 6 kites got blown out or damaged in some way. I had a line break, resulting in too much pressure on the remaining connection points and a corner of my kite ripped right off. OOPS.

I don't know how many kites were at the beach but it was a lot, and it was a festive atmosphere. Glen and Sue showed up Friday and Helmut rolled into town yesterday so we will have kiters on the beach every day .

I was too busy to take any photos, but here is one from the other day when some students from Hermosillo showed up to take photos and do a report on sports in San Carlos. 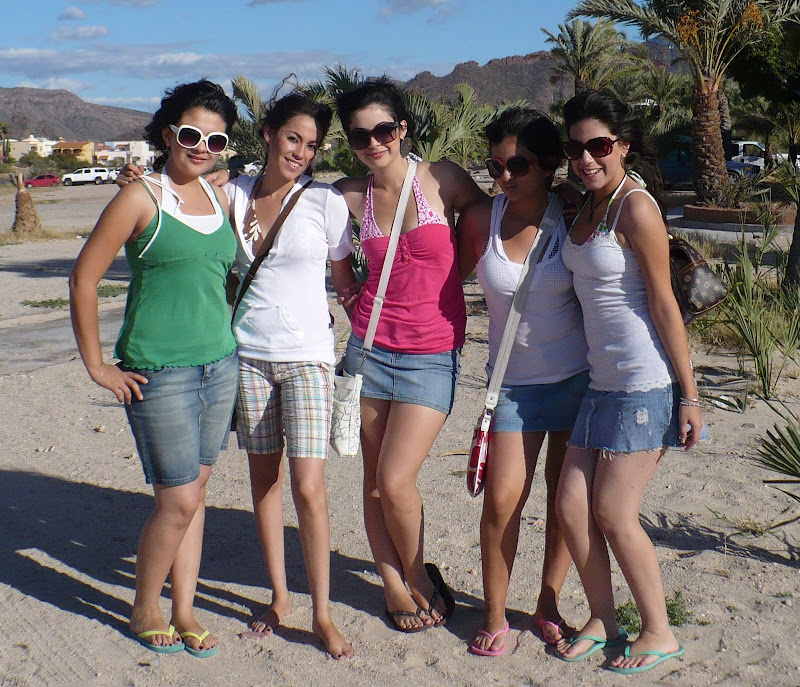 Thanksgiving day had a lot of people on the beach and seven kites on the water. The wind was light and I needed my 14M kite. Most everyone else put up smaller kites and were struggling. Today promises to be better and Saturday and Sunday are predicted to have 20 knot winds.
The Sports Center located at the Hotel Paradiso continues to make life difficult for us kiters. Last year they put several buoys spread out in our "sweet spot" and this year they have a boat anchored right in the middle of it. It makes it particularly dangerous for beginners. The kiters provide a lot of entertainment and that brings a lot of people to the beach but the businesses there have never given us much support.

Saludos a Lupita.
Posted by kiting_in_paradise at 8:07 AM No comments:

We've been getting out on the water about half of the days, sometimes powered up, sometimes with barely enough wind. The forecasts haven't been much help. Today was supposed to be a good day but it is looking like it isn't going to materialize. Nothing much is forecast for the next couple of days but then Friday should start a three or four day blow. Stuart and family is in town so he's been getting out on the water but besides him, Omar, and myself it has been pretty quiet. Water temperature is still nearly 70, but will probably drop again soon.

The folks from http://xtremebigair.com/ will be coming down Dec. 27 and can bring anything that anyone may want to order. They seem to have great gear at great prices.
Posted by kiting_in_paradise at 1:59 PM No comments:

Last week we kept getting forecasts calling for very little wind but we had several days of descent conditions. Then this week it was the opposite - good forecasts but little wind at the beach. Finally yesterday was okay, blowing 12 to 18 in the afternoon. Today should be even better. The forecast for the rest of the week looks lousy again.

Although we didn't get wind over the weekend, we still had reason to get out to the beach as the following photos show. 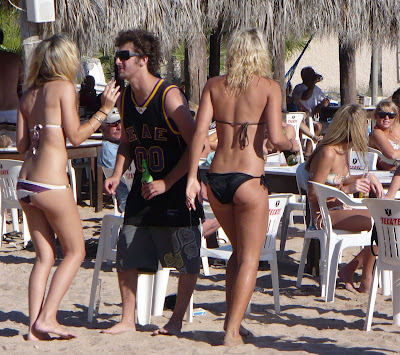 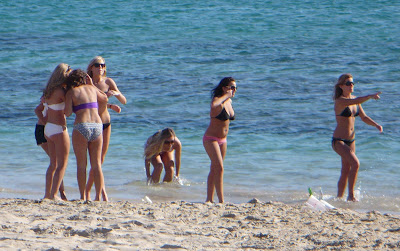 Posted by kiting_in_paradise at 12:54 AM No comments:

Fun in the Sun and Wind

The wind hasn't been great, but it has been blowing enough to let us get out on the water for a while almost every day. Yesterday it blew over 20 knots for a couple of hours but the rest of the afternoon was variable. It was still a great day at the beach. The water is cooling off and I've started using my wetsuit but others are still kiting without one.

I got an email from Ricardo, he is working in Playa del Carmen and trying to cope with the lighter winds that they have there.

Helmut and Peggy should be arriving the first part of December as will be Glen and Sue. Dave and Jackie will also be coming down from Canada. Jean-Francois and Karen will visit in December as well.

Stuart should be here in a couple of days and is staying until the middle of January. Gerald will be back, but not until January.

Roberto is in Brazil and has gotten in 50 days of kiting in two months. He will be here around the 15th of December.

It will be great to have a bunch of people to kite with.
Posted by kiting_in_paradise at 5:57 AM No comments:

Wednesday was good, but the leading edge of my 10M Nemesis blew out. It is only a year old, but it is weak where the leading edge sleeve folds flat when I roll up the kite. It always folds along the same line and that weakened it enough that it just blew out. I just ordered a new kite. I am going to go with a 10M Cabrinha Swithchblade III. I'll repair the Nemesis to use as a spare.

Thursday blew strong, strongest before 3:00 pm gusting to 30 knots. Then it mellowed out. Today's forecast is for more strong wind and hopefully we will get enough wind Saturday as well. 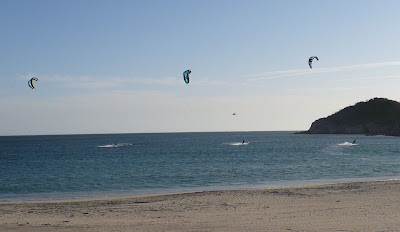 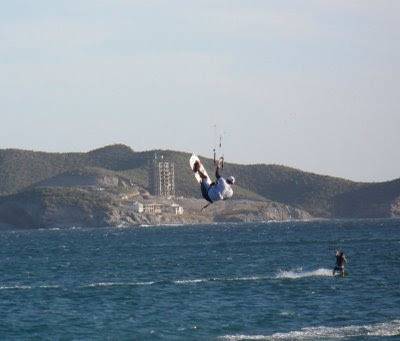 Posted by kiting_in_paradise at 11:59 AM No comments:

We had a good string of windy days but it has quieted down again. Friday was very good - over 20 knots - but Saturday's wind never materialized, only 10 - 15 knots, despite a good forecast. Lots of kiters showed up and it got kind of crowded up at the gap because everybody was seeking more wind. I've got a feeling that a lot more kiters are going to be showing up this year, at least on the weekends.
Water is still warm and some days are still hot. I hope we get another good stretch of wind before the water gets cold. It will be coming all too soon.
Posted by kiting_in_paradise at 3:08 AM No comments: