Some days the wind has been pretty light but it has been blowing. The end of 2009 is turning out to be okay and the first of 2010 is looking very promising as well. 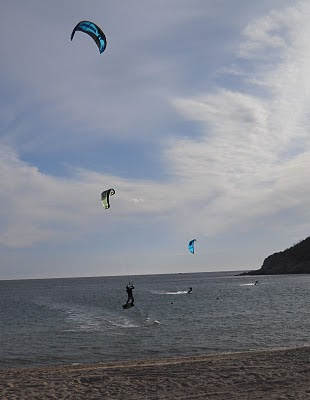 Making the most of a light day. Even Jeff made a rare appearance. 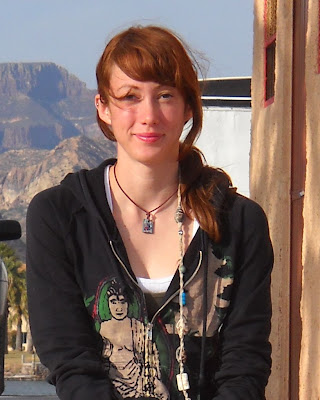 Erika braved the cold to watch the action.
Posted by kiting_in_paradise at 4:13 PM No comments:

Last year we had lots of kiters in town and up to a dozen on the water at the same time. This year we've had only a few people show up. Wind has been okay. Sometimes a little light, sometimes a little gusty. In other words - pretty normal. Water temperature has cooled off to around 65 but that is still about 5 degrees warmer than usual. The air temperature is about the same as the water today as a cold front has moved in. Wind should start again Wednesday or Thursday.

We have had some changes out at the beach. A good change is that the road has been bladed and is in great shape. Not so great is that the parking lot has been stripped of most of the palm trees that weren't removed the last time they "improved" the parking area. They replanted the trees along the entryway road but they aren't being watered so they will all die shortly. This work was done by the owners of a hotel in El Fuerte, who have taken over the old disco building at the point to make it into a reception/bar/restaurant. They are going to use that and two of the Paradiso room buildings to make a new hotel. It is supposed to open in a few weeks. They have done a lot of work fixing up the building and bringing in new furniture and fixtures and stuff but I don't see much else going on to indicate enough of a commitment to make it work. I hope I'm wrong. It would be great to have a nice bar and restaurant on the beach.
Posted by kiting_in_paradise at 11:12 AM No comments:

We had four days of wind last week and it looks like we will have five or six days this week. The air and water temperatures have been unbelievable. The beautiful conditions brought people here from Sinaloa, Hermosillo, and Phoenix for some great kiteboarding sessions. 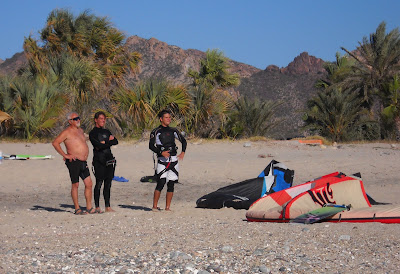 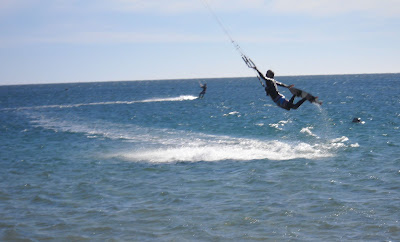 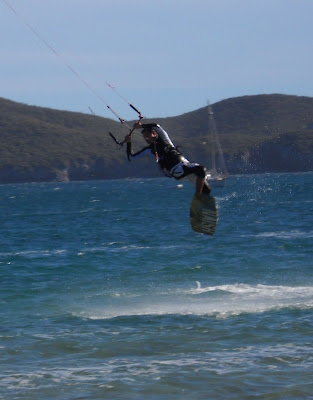 Posted by kiting_in_paradise at 9:55 AM No comments:

I haven't had much to report until this week. We finally had a decent four days of wind and this coming week is also supposed to be good. Water temperature is still warm, right around 70 degrees. 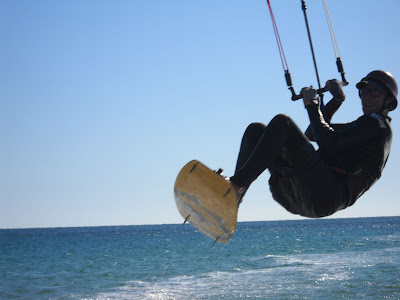 Here is Roberto, boosting well on a quiet day.
Posted by kiting_in_paradise at 12:02 PM No comments:

Hardly anything to report here. Roberto keeps track of the kiteable days and he says that we only had 8 days of wind for the month of November. December hasn't started out any better. We did have decent wind on Friday. But just one day! It never blows just one day this time of the year.
A bunch of people showed up to kite Friday and despite the fact that the wind was a bit northerly and thus gusty, we all had a good time. There were as many as 9 kiters on the water at one time. Kenn flew down with a couple of buddies and of course Roberto was there and Beau and Adam and Ricardo and Fernando and Jimé from Canada.
The water temp is way too warm for this time of the year, the chart shows it is still above 70 degrees. I took my dry suit to the beach with me, not realizing how warm the water was. I kept it stored in a vacuum sealed bag but when I took it out the neck gasket was all gooey with little stretch left. Not usable at all. When I had put it away last spring it had a small area with this problem but I never figured out what caused it and it was small enough that I wasn't too concerned. Now I'll have to order a new neck gasket.
I received a report from Glenn and Sue, who went to South Padre this season instead of coming here. He says that he's "not impresses with the wind so far." Many people love South Padre but I've never been too impressed.
Posted by kiting_in_paradise at 7:53 AM No comments: