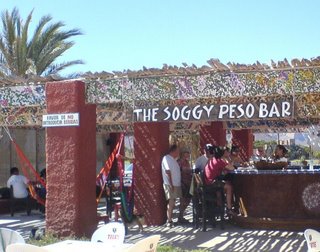 Well, there wasn't enough wind Sunday. What else is new. It was blowing 10 - 12 knots, which was enough to go out on a Hobie Cat. Rodolfo, his 5 year old son, and I had a nice sail, pulled the boat up on the rocky beach near the tip of Deer Island and had a nice time snorkling in the warm, fairly clear water. There were lots of fish, especially hiding in the sargaso seaweed that reaches from the bottom almost to the surface. I didn't take my speargun, but I should have. Later, back at the Hangout which has a new bar called The Soggy Peso, it was time to enjoy a cold beer and listen to some live music. Not a bad way to spend a Sunday afternoon.

Earlier in the week we tried out the conditions at a beach the other side of Guaymas, called Cochorit. It was fun to go someplace else but the sand is oily, the result of being downwind from the sardine packing plant. Below are a couple of photos from that day. We also got in one good day this week kiting near the condos Pilar. A bit gusty, 12 - 24, and big choppy surf but it was fun. 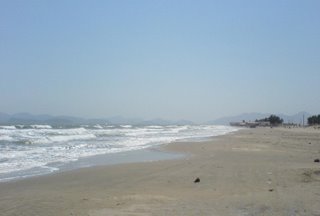 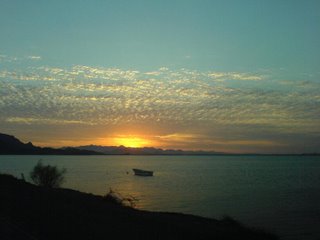 Posted by kiting_in_paradise at 5:14 PM