Today is a day off for the wind. Although some days have been marginal, most days have been kitable lately. This week is looking great if the wind direction doesn't turn too northerly, which is a possibility.
Looking forward to a great New Year.
Posted by kiting_in_paradise at 9:51 AM No comments:

Friday turned out to be a very nice day. Typical for the holiday season it was chilly and a bit crowded. 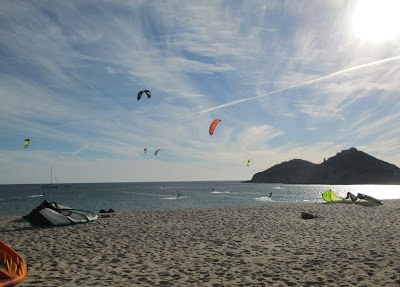 Today is looking light but could be okay. Nothing on Sunday. Next week is looking really good. Although the water temperature has dropped, it is still warmer than normal for this time of the year - about 65 degrees.

Posted by kiting_in_paradise at 8:12 AM No comments:

Hi all, I'm in Tucson for Christmas but it looks like San Carlos is about to have three great days of wind! Enjoy and boost some big jumps for me. I'll miss seeing you all. Christmas on the beach has always been a special treat. I also I want to thank all my fellow kiters for making this sport and this beach so special. You're the best!
Posted by kiting_in_paradise at 8:27 AM 3 comments:

The last couple of days were pretty good, especially yesterday. The forecast was looking real good for Wednesday and Thursday but now both Windguru and Buoy Weather say the wind will be NNW, over 330 degrees north. If that is true, the kiting will suffer. Anything over 330 degrees usually means gusty conditions, at times off shore and at times big lulls. 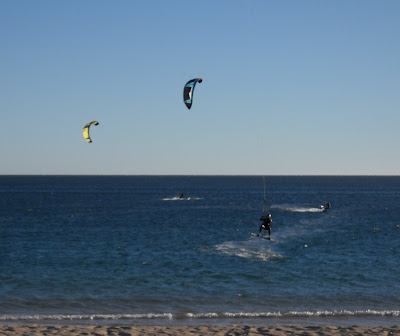 Posted by kiting_in_paradise at 2:45 PM No comments:

People have been calling, texting, and emailing me about the south wind tomorrow. South wind is almost never good. You might luck out and get a good session but I wouldn't bet on it.

See you all Sunday and Monday, I hope.
Posted by kiting_in_paradise at 7:03 PM No comments:

The forecast has petered out and it looks like no wind until Monday. Poulette was kind enough to send me some photos of the action a few days ago. That's me in the first one and Jorge in the second. 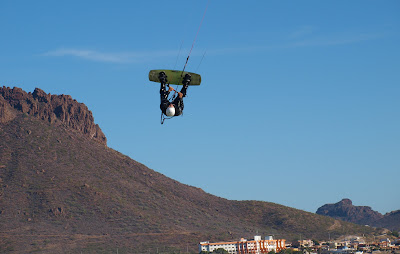 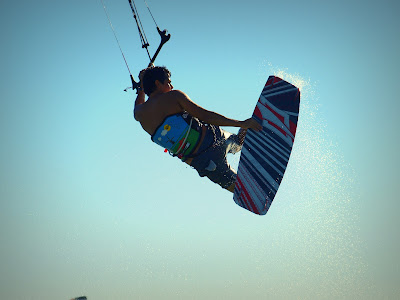 Posted by kiting_in_paradise at 5:28 PM No comments:

First, a wind report. I didn't make it out to the beach today but it looks like it picked up after 2:00 pm enough to kite. Tomorrow looks really good and possibly Wednesday. Then nothing is forecast until Monday.

Someone left a pump at the beach and Daren has it. Problem is that he is out of town for two weeks. He was going to leave it with me but then we forgot about it.

About a month ago I posted about a lost harness. Well, there is a guy that comes by the beach and sells clams and sometimes he just hangs out. His name is José. He claims he found the harness and that he pawned it for $600 pesos and would need that amount to reclaim it. Bullshit. He later offered the harness to Jesus from Nogales for $300 pesos. I've known José to be a thief and a liar for years. He has been known to "find" equipment before it is lost and then tries to sell it back to the original owner. Be aware and watch your equipment when he is around.

Also, if you are the last person to leave the beach - please look around and see if anything was left behind. Pick up anything you see and let me know and I'll post about it here on this blog.
Posted by kiting_in_paradise at 6:08 PM No comments: