Nothing like a religious holiday to get people drinking and acting crazy. Just like Mardi Gras that starts off the period of Lent, people here celebrate the end of Lent during a week long celebration known as Semana Santa. Officials here say that something like 250,000 people enter our little town during this week, and it appears that maybe 30,000 visitors or more are here at the peaks of activity. On a normal weekend I doubt that we have more than 300 at a time. 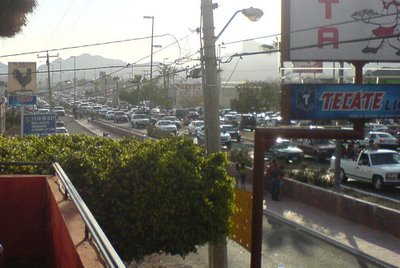 The photo above was taken at 6:30 in the evening on Friday when the party was just getting going. Traffic, especially foot traffic picks up more as the night goes on and continues into the wee hours of the next morning. I haven't tried to make it out to the beach for a few days because of the traffic and because the wind prediction hasn't been favorable, but today we are supposed to have wind so we will try to get out there early enough to avoid the crowds.

I recently got an email from Glen, who was here kiteboarding this winter. He and his buddy, Dave, came down as novices and left as accomplished kiteboarders. They recently made a trip to South Padre in Texas and Glen said that he kited all ten days he was there, with several days of 30 - 40 knots. Below is a photo of Glen when he was here this winter, getting some good use of an old kite that I sold him for $50. Way to go Glen !
< 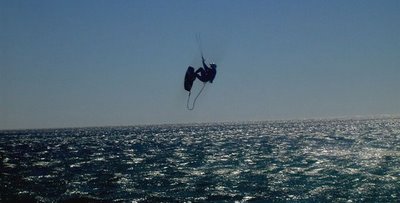 Posted by kiting_in_paradise at 7:09 AM