We got back on Monday and had great wind Tuesday and Wednesday. It felt good to be back on home turf with wind on my back. There aren't a lot of kiters in town right now and during the week it is mostly just Roberto and myself and Gerald. Gerald is still in the beginning stages of learning the sport and is an inspiration considering he is in is mid 70's. A lot of days this time of year are cold and gusty with winds up to 30 knots - not ideal for learning but Gerald is out almost every day. The rest of the local crew are working people so they show up when they can, weekends and after work. Sometimes the late afternoon session is the steadiest wind anyways. I've been back over a week now and although I am getting in a lot of kiting days I sure miss that warm Caribbean water. Posted by kiting_in_paradise at 7:10 PM No comments:

We left Jeff in Tulum and headed north, stopping first in Playa del Carmen. Really didn't care too much for Playa. Compared to Tulum the beaches there were small and crowded and the sand wasn't as clean. The water wasn't enticing to go swimming in either. Great place to go shopping and I imagine a great night life, but we weren't looking for that and since the wind wasn't blowing we continued north and got a place for the night in Puerto Morelos. Wind prediction the next morning didn't look good so we decided to go to Isla Blanca to check it out and to be ready for the Northerlies that were due the next day. We lucked out and there was wind on the ocean side of Isla Blanca (actually it isn't an island and it isn't an ocean) and we got in a good day of kiting. There was a kiting school there and they told us of a place to stay nearby. We went to Hacienda Punta Sam and got a nice room plus all meals and drinks for under $50 each. Very good food. The place was a real bargain. It was right on the water as you can see in the photo below. The northerlies came as predicted the next day, along with a little bit of rain. We went to the beach early and there were already some kiters out tearing it up. They were also having an instructors clinic going on so there were more than a few people, all of them helpful and friendly. The beach launch was small, but you could also launch from the water as it stayed shallow for a long ways. The next day was Sunday, our last day. It started out rainy and didn't seem too windy. We drove out to the beach and it was already nuking. Another 30+ knot day. The local guys were out catching lots of air on 7, 8, and 9 meter kites and I had to wait a while before I could get out. The wait was always worth it as the whole lagoon is shallow and even when the wind is howling there is very little chop.

Next morning it was off to the airport and after a stop in Mexico City we were back in Hermosillo. The bus from there to Guaymas was only $5 each and we were back in San Carlos.

I think I got in 7 days of kiting out of the 2 weeks that we were gone but most of those days were in marginal conditions. If the wind was better, I would definitely spend most of the winter in Tulum. It really was nice there. The best wind was at Isla Blanca, which is just north of Cancun, but the drive out there was long and Cancun is expensive.

Posted by kiting_in_paradise at 1:08 PM No comments: After a week in paradise the wind was going to switch to the north and that meant we had to go north to find a beach exposed to that direction. Jeff had found a job as a kiteboarding instructor so we left him there in Tulum. He seems to like the surroundings okay. We will miss him out on the beach back in San Carlos. Adios Jeff.
Posted by kiting_in_paradise at 5:28 PM No comments:

Five Days Into It

Roberto, Jeff and I are five days into our trip to the other side of Mexico. We flew into Cancun on Monday and hung out there for a day. Real good food at decent prices but everything else is expensive. 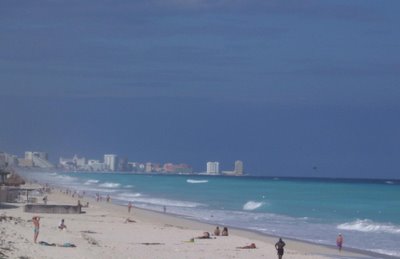 We went to Puerto Morelos the next day and got in a bit of kitesurfing. Puerto Morelos is a nice quiet town but with the emphasis on little. No wind the next day so we headed to Playa del Carmen to check out the scene there. It is a real tourist center with lots of fancy hotels and busy beaches. The center of town is automobile free for several blocks with lots of shops to explore. 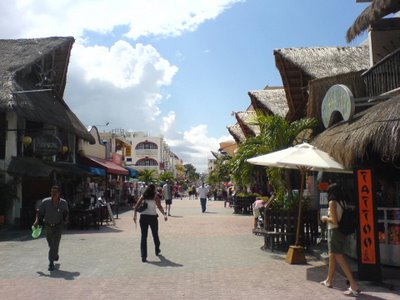 Found the kite beach but still no wind so we headed south again, this time to Tulum. We visited the Mayan ruins which was pretty nice and they are overlooking the beach. When we get wind we can kite right in front of them. Speaking of wind...haven't had any since Tuesday. We have been filling in the time with checking out the beaches, driving through the jungle, hiking in to cenotes and of course eating and drinking. 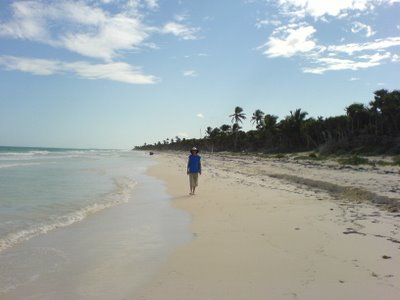 Break in the Weather but Too Late, We Are Out of Here

This has been the worst stretch of non kitesurfing weather that I can remember. Finally we had some wind yesterday and today it was blowing hard. The next couple of days should be good as well before it shuts off again. It is a nice change, but three of us are heading across the country for a bigger change. Jeff, Roberto, and myself are flying over to Cancun on Monday and we will probably stay in Play del Carmen, about 45 miles south of Cancun. It is on the Caribbean coast with tropical weather and warm water. We managed to get $185 round trip tickets on Aviacsa airline.

A few days ago we had a real nice rainbow out at the kite shack. 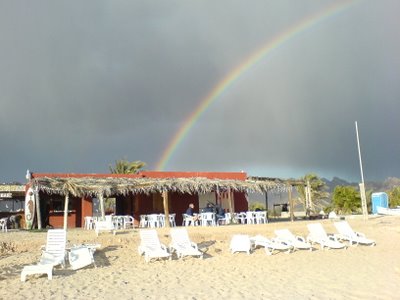 Unfortunately, there was a bad accident on the road out to the beach yesterday. It seems like we get way too many serious car wrecks for such a small community.

Click here to go to next blog entry.
Posted by kiting_in_paradise at 10:15 PM No comments: