Two good days of wind as we near the end of the season. I didn't make it yesterday as I was at CIMA Hospital, but I made it to the beach today as did a great many of kiters. I won't be kiting for two months as the study they did yesterday showed that I am still at risk for more strokes. Hopefully it will be resolved within a couple of months. 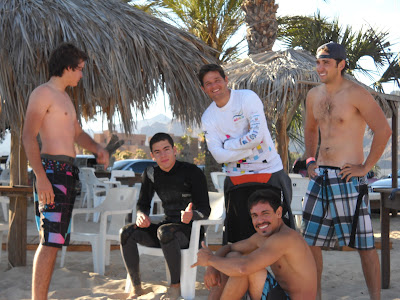 Posted by kiting_in_paradise at 8:19 PM No comments:

A Couple of Beach Days!

Thursday and Friday are looking good for wind. I'm hoping to make it out there, although I won't be kiting. I need to go for more tests before I get the doctors OK to pick up where I left off. If the next test shows no more threats of a repeat, I'll be as good as new and you won't be able to tell that I lost a few brain cells. Until then, they warn me that another incident would be catastrophic. I might not recover from the next one.
Posted by kiting_in_paradise at 7:50 AM No comments:

Friday night I had a massive stroke.


I had gone to Guaymas Friday to spend the evening with Manuela and decided to return early, about 12:30, since we had plans to spend Saturday night dining and dancing.

I was sitting at my computer for a bit before going to bed and suddenly I felt very tired. I passed out and fell right over on the couch. Around 2:00 I woke up and couldn’t sit up. My left arm could move and I grabbed the back of the couch and straightened myself up. As soon as I let go I fell right back down. I tried again, with the same results. I then managed to force myself to sit up and move my hand to the armrest and pull myself to lean to the left and I was sitting up. Yeah!

I looked down at my legs and I found that I could move my left leg but the right one was crooked and wouldn’t straighten out. I tried to get up but I got nowhere. I managed to kick my right foot over to straighten it somewhat and tried to stand. Success! For a moment, and then I fell to the right and tried to put my arm out to catch myself but the right arm was useless as well. I fell like a tree and ended up flat on my back. Couldn’t sit up. Weird feeling lying on the floor not able to move.

I struggled and managed to roll over and pushed up to my hand and knee. Eventually I was able to stand on one leg. My mind couldn’t comprehend what was going on, but I decided that I had to get to bed. Whoops, back on the floor again. Try it again. Once up, I braced my leg against the coffee table to allow me to reach the pull cord on the ceiling light but my right hand still wouldn’t work. Managed to get it with my left hand. Started to shuffle over to the stairs to the bedroom but the first step tripped me up again and I was on the floor. I couldn’t even crawl up the stairs without falling over on my side and fell back down the stairs a couple of times. There were only four stairs and I finally managed it. I grabbed a wall post to reach up to turn off another light and went back to all fours to reach the bedroom. One more light and I was ready for bed. Crawled into bed but it felt strange. I laid on my side and could feel that my right arm and leg was under me but there was no feeling to them. I couldn’t straighten them out or put them where they would be comfortable. I laid awake for a couple of hours and finally fell asleep.

Next morning I woke up at 8 and I had an appointment at 9 for a job. My leg had movement now and I managed to get dressed. Went to the bathroom to brush my teeth but my right hand still wouldn’t cooperate. I then looked at my tongue in the mirror as I knew that a sign of a stroke was a crooked tongue. Sure enough, it was off to the side. I was moving around in a daze, but I was coping. For some reason I thought that I could conquer it. My brain was mush. The phone rang and I picked it up. It was Phyllis about the job. It was then that I realized that I couldn’t talk, just some gibberish. I was still determined to continue on. I got in the car to go to the job. I couldn’t put the key in the ignition with my right hand so I did it with my left hand, and off I went. I was aware that I was driving well but wasn’t controlling my speed very well. Mostly I was driving too slow. I managed to reach my destination and there was Phyllis. She was showing me the job and I was answering her with monosyllables. She understood that something was wrong and had me sit down and try to talk to me. I couldn’t do it. She handed me a pad of paper and a pen and I couldn’t write any better than I could talk. She asked me if I had a stroke and I nodded yes. She immediately searched for a doctor and off we went. Now my leg was dragging again so she had to drive.

They got me hooked up to a heart monitor and then tried to get a needle in a vein for an IV drip. Several attempts in several locations before they had success. My veins tend to roll away when you push on them as there is no fat tissue to hold them in place. They gave me blood thinners and who knows what else and attached me to an EKG. I finally was able to talk some, but for some reason only in Spanish. Dr. Canale wanted me to speak only English in order to not lose my ability to speak my native language. I tried and tried but it was very frustrating. I was only able to think in Spanish for a few hours but eventually I got better.

They got enough medicine in me to do some good and sent me home. Phyllis drove me home and arraigned for someone, Roberto, to come babysit me. Phyllis was incredible the way she catered to me. She checked in on me constantly, drove my car home for me, bought me food and drink, even checked in on me as her last stop before going home, and she is coming here first thing in the morning. It is a good thing that I had an appointment with her, who knows how long I would have waited to seek help, if ever.

It has only been a little more than 24 hours since this happened and my recovery is amazing. I still have some weakness and speech fails me a little but I am confident that I will get completely better. I’ll know more when they do a brain scan of some sort to see what damage was left, if any.
Posted by kiting_in_paradise at 1:19 PM 1 comment:

Friday was a little bit of wind. Later in the week we may have a little more. Nothing much. It isn't looking good. 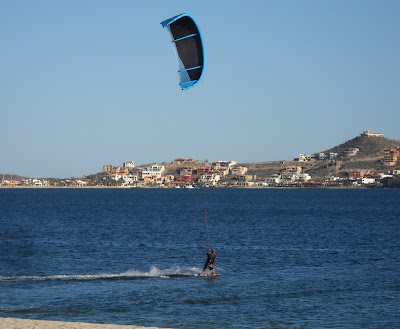 Posted by kiting_in_paradise at 7:14 PM No comments:

We've had some good days. Today it was blowing hard as you can see in this photo: 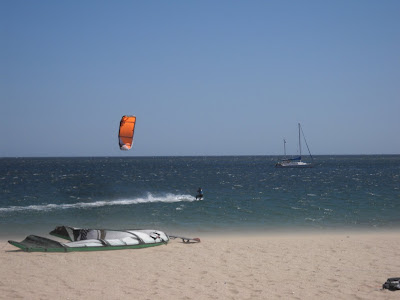 Monday should be just as good, and Tuesday we'll hope. After that who knows? Nothing in the forecast. Good days may be few and far between. The end is near. 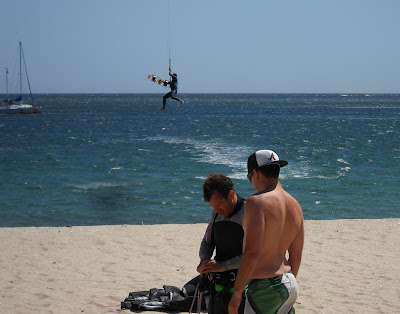 Posted by kiting_in_paradise at 6:47 PM No comments:

The wind has been blowing strong the last couple of days. Early afternoon saw the sand blowing waist high but by 3:00pm it had mellowed out and was sweet. It looked like everyone was having a good day. Water is still chilly but the air temperature is nice. 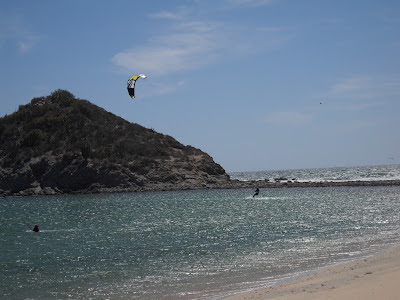 George is nearing the end of his stay in San Carlos and has been putting in some long sessions and his progress shows it.
Posted by kiting_in_paradise at 5:48 PM No comments: 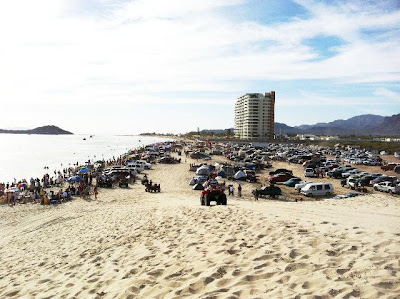 I think that this photo says it all.﻿ Lots of people and not much wind. Buoyweather is calling for some wind today (9 to 13 knots) but I won't be going out there. Traffic yesterday afternoon was standstill coming back into town. This year they severely limited the number of permits for stands selling food and other stuff and very little live music and almost no parking in town. I returned home early, about 5pm but the party in town sucked. Very few people walking, everybody driving. Nothing going on.
Posted by kiting_in_paradise at 9:30 AM No comments:

The beach is getting busy and today was only Monday. The rest of the week will be even more crowded. Forecast shows wind, then it changes to no wind. Right now it is showing good wind tomorrow and then later in the week. We'll see. 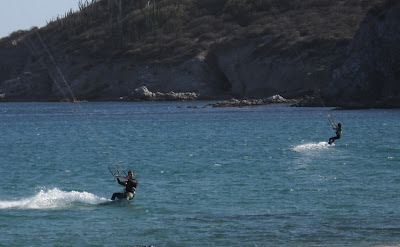 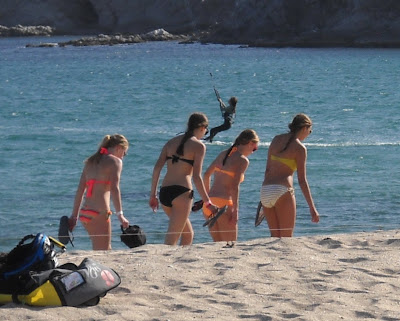 People kept getting in the way of my photos, damn.
Posted by kiting_in_paradise at 8:46 PM No comments:

The weather has been warm and although the wind hasn't been blowing as consistently as we would like, there has been wind. Sunday was strong all day and today should be the same. A bit choppy and gusty for the beginners. Tuesday should be a mellower day. The beach has been getting a little crowded so we need to think safety out there. Launch away from the crowd, and don't be shy about asking for help.
Posted by kiting_in_paradise at 6:50 AM No comments: