Back on the Water

I spent Christmas up in Tucson, and while it was great to spend time with old friends it didn't take long to get tired of the cold weather and all the traffic. While the wind hasn't been perfect, I have still gotten out kiting both days since my return and today and tomorrow should be okay as well. 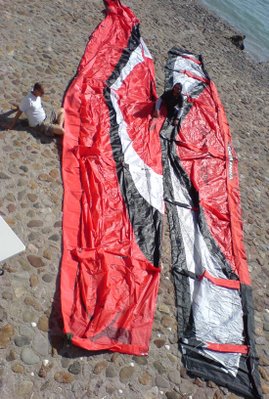 I picked up a couple of light wind kites on eBay to play around with and tried out a 19.5 M Cabrinha Contra yesterday. We had a lull in the wind when I decided to put it up but by the time I got out on the water it had picked up again. Russ was out on a 7.5M kite at the same time I was flying the 19.5M. It was smooth and controllable but nothing special. Just another big kite. I didn't dare try the other kite - a 30M Naish kite that I got on eBay for $100 brand new complete with bar and lines.
Lots of people on the beach and lots of kiters on the water. I like it a lot better than the years past when often it would be just a couple of kiters and no one on the beach. Water temp is still way above normal at 66 degrees.
Posted by kiting_in_paradise at 7:39 AM No comments:

It looks like San Carlos is getting some good wind for the holiday but I am up in Tucson far from the water. I'll be back in time for the next good blow to start, which Windguru says will be Thursday the 28th after a break of only a day or two. If anyone is interested, I have a slightly used 11M GK Sonic kite up for sale on eBay. Just click here to see it.

I've been looking at Playa del Carmen as a place to go next month for a kite vacation but the wind reports lately don't look encouraging. The search for warm water and good wind continues. Any suggestions?

Merry Christmas to all.
Posted by kiting_in_paradise at 10:06 AM No comments:

It has been a good four day blow, with winds gusting up to 30 knots. Lots of people out on the water and everyone has been having a great time. Last year we would have been complaining about how gusty it is but now almost everyone has a small bow kite and they handle these winds without a problem. Last year I had the only bow kite on the beach but the other day there were seven or eight bows being flown and only one C kite. The kites just keep getting better.
The water temperature is still several degrees warmer than normal at 68 degrees. Usually it is closer to 60 and by the end of the month it is often into the 50's. Let's hope that it stays warm all winter. 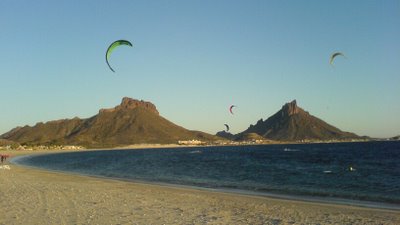 Posted by kiting_in_paradise at 7:18 AM No comments:

Three days without wind and the kiters are getting restless. The forecast for tomorrow isn't great but if there is any wind at all we'll be out there. They say it will start blowing again on Monday. I hope so. I've been watching kite videos and thinking about another kiting trip. This time to Playa del Carmen. More on that later. For now, a couple more photos from out at the beach. 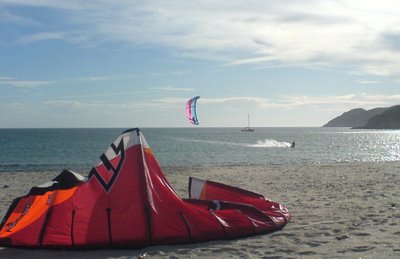 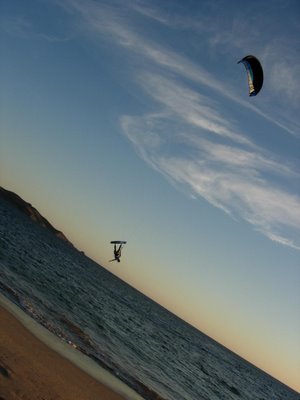 Posted by kiting_in_paradise at 9:38 PM No comments:

The wind has been howling for quite a few days now but during most of the day it is still too northerly and the beach is shielded. We usually get a couple of hours of good wind late in the day. Yesterday was a day for 12M kites but Sunday was gusting up to 30 knots. Below is a photo of Jeff and Carlos after the session on Sunday. 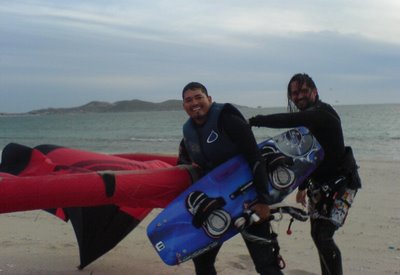 The last few days have been real windy but it was blowing too Northerly to do us any good until Friday. When the wind blows from higher than northwest it is blocked by the mountains and it doesn’t blow close to the beach. The whole town of San Carlos can be in the wind shadow while it is howling off shore. Friday was a Mexican holiday due to inauguration day for the new presidency so we had a good showing of people. Both Carlos’s, Ricardo, Jeff, Dave from Canada, and myself were out on the water. We all got to the beach early and it was a bit gusty. Jeff blew out the lines on his kite but it was a good afternoon in general. 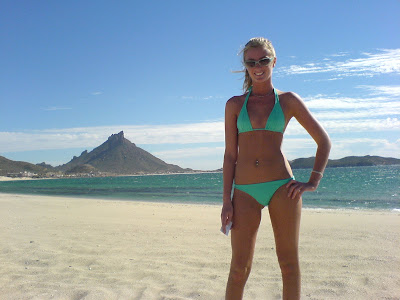 In my blog of Nov.16th, http://kiteboard-mexico.blogspot.com/2006/11/still-hasnt-kicked-in.html, I wrote that there was a non-certified instructor showing up at the beach that I said should be avoided, implying that he didn’t follow the current safety guidelines. He replied with a post in the sailing forum that he moderates at http://sancarlosmx.mywowbb.com/forum4/2027.html . He seems to be challenging me to back up what I wrote, even calling me a coward. Well, readers – you be the judge.

He teaches his clients to set up the kite in the self launch position. WRONG
I have observed that Vinny always sets his kite up this way (he is the only one that does) and will leave it up on end while he goes and gets his wetsuit on, etc. He doesn’t even turn the kite down wind; it is constantly attempting to blow away and the only thing that saves it from doing so is that he underinflates the kites and thus are not so apt to try to straighten out. Your kite should be upside down while you set it up and while you get ready.

He then usually shows them how to self launch. WRONG
Beginners should not be self launching; they should be encouraged to always seek out someone knowledgeable to assist. Many beginners have been having rough launches and they need to know that none of us mind giving them a hand to keep everyone safe. If we see you need help, we won’t wait for you to ask – we want a safe beach. Vinny has objected when we try to give advice or help to one of “his” students.


Vinny also has had his students launch on the beach while hooked in and facing away from the sea, towards land. WRONG
Beginners should never hook in until they are getting into the water and should get into the water as soon as possible after launching. (Please note that this was written in 2006 before we had a modern chicken loop - hooked in meant powered up.) It is better to launch towards the water for obvious reasons. Vinny has his beginning students not just hooked in, but he has them putting the kite through the power zone while on the beach in order to be drug down the beach on their heels.

He teaches his students when self rescuing they should attach the bar leash to the board and follow the safety line to the kite. WRONG
The kite can relaunch with this setup and if you are tangled in the lines, you will get hurt, and look out for the board as it flies past you – that happened to me years ago and I will never self rescue that way again. If you don’t know how to do it right – get instructions from someone who does know.

The other day I was telling someone that I really recommend an impact vest harness and Vinny said to him that he doesn’t need the flotation because he will be wearing a wet suit. WRONG
Turns out he had already sold this guy a harness. Well, an impact vest is not for flotation, Vinny, it is to absorb the impact of crashing as the name suggests. Most have very little flotation. Your ribs are very vulnerable. One of our seasonal kiters, Stuart, broke a rib just a few days ago. Last year Ricardo cracked one, Jeff has broken one and Dave Baraff did also. That is just on our beach, where we only have a few kiters.

Vinny sold a 20M kite to a friend that has never tried the sport. WRONG
Oh my God. A 20M kite to use on a beach where the wind howls. Someone sold a 20M kite to a novice on the other side of Mexico and the local kiting community practically called for his head. Read the comments at http://groups.yahoo.com/group/kitesurfmexico/message/6040 (It is in Spanish) I admit that Vinny’s customer weighs more than 70 kgs but this is a kite that can easily get any beginner into trouble.

This is just the major stuff.

My opinions are based on what I have read and watched, and what I have observed on regulated beaches in many locations including major areas such as Cape Cod, South Padre, and Cabarete.

Read the manuals, watch the videos, and take lessons from a certified instructor.

I invite comments.
Posted by kiting_in_paradise at 12:04 PM No comments: